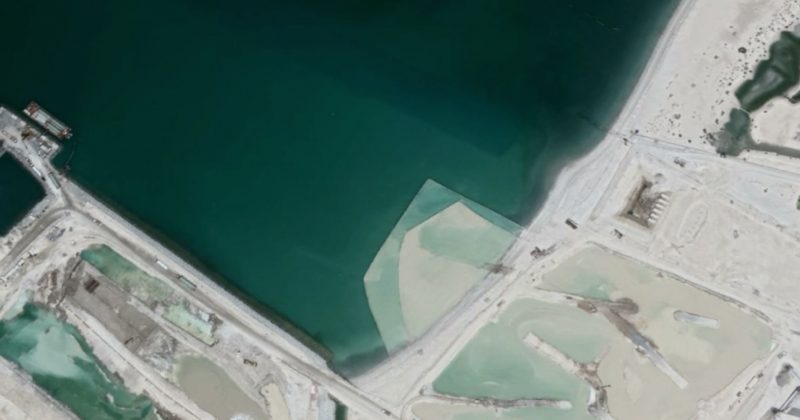 Following a recent attack on a hopper dredger in Indonesia over fears about the environmental damage it could cause, we look at whether deploying silt curtains could help mitigate issues and assuage concerns.

Earlier this month, news came out that the hopper dredger, Queen of the Netherlands, owned by Boskalis Westminster Shipping and operated by Boskalis Indonesia, was attacked by boats carrying hundreds of fisherman and environmental activists, offshore from Makassar Port, South Sulawesi, Indonesia. Read the full story on the Maritime Bulletin website.

The ship was sailing to a new dredging or sand-mining site in the waters of Takalar Regency in southwest Sulawesi when it was shelled with stones and Molotov cocktails, which ignited several fires on board, while several pneumatic cables were also cut. The ship was eventually forced to return to port, while up to 12 protestors were arrested by Indonesian authorities.

Although an extreme case, the incident highlights the ongoing friction between environmentalists and governments and industries, as can also be seen with protests in the Maldives over similar dredging operations. Check out the #StopGulhifalhuEcocide hashtag on Twitter.

This is not the first time that concerns have been raised in Takalar, with residents from 21 villages along its seashore raising their voices in protest as far back as 2017 over plans for sea mining off the coast, which fishermen said would destroy the environment and impact their livelihood and incomes.

While dredging can often be a useful process to open marine traffic pathways, and remove unwanted deposits, it is not without its disadvantages. Despite its commercial benefits, it is widely acknowledged to possess a major threat to marine environments due to the disruption it causes to habitats and the delicate ecosystems they contain.

Of course, it would be unrealistic to ban all dredging activities, so therefore, it is critical that measures are taken to mitigate the impact of these activities and to protect the surrounding marine environments.

One such method is the deployment of silt curtains, which are extremely effective solutions for controlling dispersed suspended sediments – when specified and installed correctly.

In the Middle East, dredging operations require the use of settlement ponds for dredged slurry and there are several examples that highlight their effectiveness. We recently completed a project where we deployed double layer silt curtains to form a barrier between the outflow from settlement ponds and the open ocean, and we have learnt several lessons from this project.

Firstly, it is important that the correct silt curtain model is selected so that it can withstand the hydrodynamics and associated forces from varying environmental conditions, as it will be exposed to significant forces from tides, currents, and wave actions. Therefore, material strength is critical and must always be a paramount consideration.

Furthermore, correct positioning of silt curtains is essential – they should ideally be placed a minimum of 50m away from any discharge as this would provide sufficient area and volume for the settlement of the silt, reducing the risk of submersion through the build up of silts at the base of the curtain.

Maintaining a reasonable distance also limits the flow velocity of silts travelling directly from the discharge point, which not only reduces the force on the curtain, but also limits the amount of resuspended silt taken from the seabed underneath the curtain. This is often overlooked, but it has played a crucial role in the successful deployment and integrity of silt curtains on our projects.

In conclusion, a correctly specified, installed and maintained silt curtain is an extremely effective tool in the control of suspended sediments, which in turn limits the impact on the surrounding marine environment. If deployed properly, their use will help find a careful balance between undertaking necessary works, and preserving delicate ecosystems, which in turn will prevent scenes like we’ve witnessed in Indonesia.

Access the full case study of the double layer silt curtains here. If you would like to know more about our Ecobarrier Silt Curtains and how they can be deployed properly, please speak to Prathyush Levakumar on [email protected] or +971 4 885 3944.