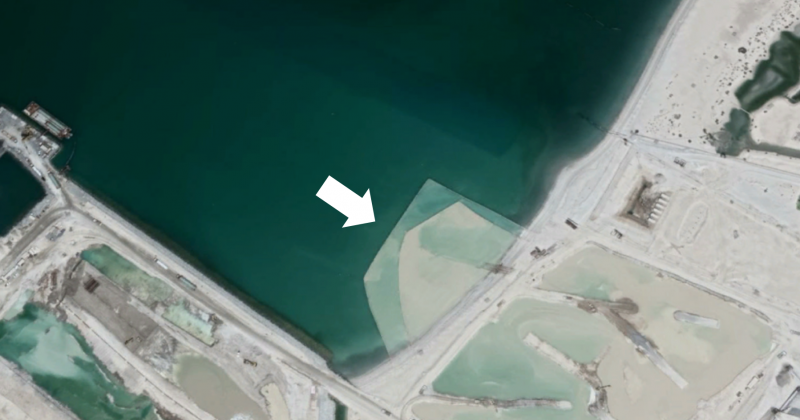 The image demonstrates a successful silt curtain deployment in the Middle East, where dredging operations required the use of settlement ponds for the dredged slurry. This project is a good case study to demonstrate the effectiveness of a correctly specified and installed marine protection barrier.

The double layer silt curtains (identified by the arrow in the picture) form a barrier between the outflow from the settlement ponds and the open ocean. At the time the image was captured, extremely turbid water was flowing beyond the settlement area, through the outflow and into an enclosed area where the silt curtains form the last line of defense. These silt curtains were originally installed in mid-2017 as a “back-up” only. Two previous silt curtain installations – one within the settlement area and one in the ocean – were installed as the first line of protection. They have however since perished as they were not suitable for the environmental conditions or project purpose. As a result, the correctly specified “back-up” double layer of silt curtains has become the new “first line of protection”, as can be seen in the image. They are performing effectively, despite being under extreme pressure as the sole line of protection remaining.

What are the critical factors to consider when selecting and installing a silt curtain for maximum effectiveness?

Firstly, it is important the correct silt curtain model is selected to withstand the hydrodynamics and associated forces from varying environmental conditions, as the barrier will be exposed to numerous loads from tides, currents and wave actions. Not all silt curtains are created equal and there are many models on the market that use inferior materials and designs. In exposed conditions as with the above project, forces are significant and demand a heavy-duty silt curtain. Material strength is critical and must always be paramount in the selection of the silt curtain.

With increased water depth and respective deeper curtains comes a significant increase in the forces. For this reason, it is seldom practical to extend a silt curtain beyond 4-5 meters. Excessive loads can lead to curtain failure or anchoring system failure when not specified correctly. Furthermore, improper anchoring can lead to movement of the barriers and an altered configuration, which in turn places additional loads on individual connections and subsequently increases the probability of failure.

Silt curtains are designed to act as a settlement pond by allowing silts to settle from the upper portion of the water, not to contain the water completely. Water should be allowed to flow under the silt curtain and a minimum gap of .5 meters should be maintained. As can be seen in the image, some silt will migrate, however, the area of spread is limited. If the curtain sits on the seabed, sediment can build up over time dragging the curtain down and eventually the floatation will be submerged. Where high levels of silt and sediment are present; as with the attached reclamation project, the risk is increased.

Correct positioning of the silt curtains is also critical. They should ideally be placed a minimum of 50m from any discharge. This provides a sufficient area and volume for settlement of the silt, reducing the risk of submersion through the build-up of silts at the base of the silt curtain. Maintaining a reasonable distance also limits the flow velocity of silts travelling directly from the discharge point, which not only reduces the force on the curtain and the potential of vertical lifting, but also limits the amount of re-suspended silt taken from the seabed underneath the curtain.

Another important factor impacting the effectiveness of silt curtains over the duration of a project is maintenance. This is often overlooked, yet it has played a crucial role in the above successful deployment and the integrity of the silt curtains over the last 18-month period. In adverse weather conditions, the silt curtains should always be protected and closely monitored. If removal and relocation is not possible, the curtain should be furled up to reduce impact and loads. In addition, a maintenance schedule should include the repositioning of anchoring; maintaining an equal distribution of loads and the replacement of any damaged connections, limiting the risk of failure.

A correctly specified, installed and maintained silt curtain system is extremely effective in the control of suspended sediments, and in turn, limits the impact on the local environment.