A recently successful project has shown how Bolina booms can help stop the spread of plastic in our waterways.

A recently conducted study has found that river floods are boosting the spread of plastic around the world, raising fears over the potential health risks posed to people and wildlife. Globally, the research shows that a low-severity flood can boost the spread potential of plastic nearly ten-fold when compared to non-flooding conditions.

Furthermore, the study reveals that the ability of floods to increase the spread of plastic is greatest in the developing world, where the rates of plastic pollution are the highest, and flood defences are inadequate.

This is by no means a developing world problem either, with cities in the ‘developed world’ also contributing hugely to the plastic pollution problem. In fact, one of the study’s lead authors points out that if plastics get flushed out of a city and into its sewer networks, the pollution can end up in river systems hundreds of kilometres away, making it much more difficult to clean up.

With the world producing around 350 million tonnes of plastic a year, this is not a problem that is going away anytime soon. Alarmingly, it is not quite clear to researchers where all the plastic waste ends up, with between 10,000 to 100,000 tonnes of what is produced ending up in the world’s oceans.

It is clear that urgent action needs to be taken, and while not every piece of plastic can be removed from our waterways and systems, there needs to be systems in place to mitigate its spread. 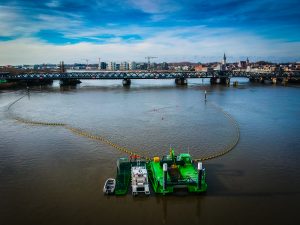 A successful example of this is a project we recently carried out with DEME, a Belgian marine contractor, to engineer the longest river barrier in Europe, which DEME installed on the river Scheldt. The Bolina floating debris boom removes plastic and other floating debris from the tidal river and has been a major success for us and the client, funnelling 218 kilograms of waste a day into the plastic catcher, removing seven tonnes of debris and pollutants a month from the river.

The litter trap was installed in Temse, with a floating funnel that covers part of the river. Operational 24/7, it catches and collects drifting debris inside the Bolina floating debris booms. Once the litter trap is full, everything is transferred into a CO2 neutral DEME vessel using VR technology. The debris is then transported to the riverbank, where DEME transfers once again the litter for collection and processing.

An innovative design was required due to its tricky location on the river Scheldt near the Temse Bridge. Various factors came into play including the tidal effect of up to six metres, the alternating current directions and water speeds of up to two metres per second, as well as the river being a busy shipping route – a fitting challenge for both Ecocoast and DEME.

The original design integrated the tried and tested Bolina floating debris booms that would rise and fall with the tide. Two giant ‘arms’ form a funnel and guide the pollution towards the plastic collector to be trapped and then disposed of by means of a waste container and an autonomous vessel. Both arms are constructed from one full length, without intermediate pieces or other connections in order to maintain maximum tensile strength. The arms span 103 meters for the northern side of the funnel and the southern arm is 175 meters.

Due to the extreme tidal effect, Bolina D-500 pile drivers were provided at the beginning of the booms, which followed the full height difference of six metres, four times a day. At the plastic collector, a special roller system was designed for the connection between the Bolina floating debris booms and the collector itself. The new roller system allows free movement between the dirt screen and the pontoon in the event of strong waves and tides, without losing any plastic or floating debris.

With waterways worldwide facing severe pollution challenges, perhaps cost-effective solutions like the ones on offer from Bolina could be a way of addressing the problem. With minimal maintenance required, and a robust design, our booms will offer governments, private companies and organisations a chance to clean up their water systems and allow for the revitalisation of their ecosystems and environments. Get in touch to know more!